We Stand Against Racism

There’s not an American in this country free until every one of us is free.

We cannot stand for racism, nor can we be silent when we see it. We stand with all those who have experienced prejudice and hatred, and we are committed to our role in helping make Arizona and this nation a place of equality for everyone.

Join the D-backs in celebrating Juneteenth - the oldest nationally celebrated holiday that commemorates the ending of slavery, also known as Black Independence Day. In observance of Juneteenth, Friday, June 18, 2021 is a company holiday for the D-backs and all employees will use this day for education, reflection and celebration.

Pilgrim Rest will join the D-backs the evening of Saturday, June 19, 2021 at Chase Field for a celebration featuring pregame recognitions for community leaders and organizations and more. Chase Field will feature a special food item this Saturday -- an authentic Fried Apple Pie recipe of Edna Lewis, a pioneer African American chef who was the first African American woman from the South to publish a cookbook that did not hide her name, gender or race.

Ms. Juneteenth
13th
I Am Not Your Negro
Freedom Riders
Just Mercy
Hello, Privilege. It’s Me, Chelsea
When They See Us

Join the Movement to fight for Freedom, Liberation and Justice.

Donate now to help the ACLU respond to ongoing threats and seize every opportunity to move freedom forward in 2020.

The National Museum of African American History and Culture has introduced a digital program exploring race, racial identity and its influence on American society.

Be a Better Ally

The Black Lives Matter and #MeToo movements have forced people in positions of power - namely, the white men who dominate institutional leadership roles - to realize they must personally step up to make organizations more fair and inclusive. That means playing a truly active role in helping marginalized colleagues advance (instead of just delegating diversity efforts to human resources).

How can white men be effective allies to those employees? First, by taking responsibility for their own behaviors, educating themselves about racism and privilege, and getting and accepting feedback from people in underrepresented groups. They can also become confidants to and sponsors of women and people of color and insist on diverse hiring pools and practices. They can vigilantly watch out for bias at work, intervening decisively if they discover it. Last, they can work to build a community of other allies against racism and sexism.” View Article »

The Guide to Allyship

The Guide to Allyship is an open source starter guide to help you become a more thoughtful and effective ally. View Guide »

For 95 years, the Schomburg Center for Research in Black Culture has preserved, protected and fostered a greater understanding of the Black experience. Learn more about the Black experience to help foster understanding and empathy, teach important history, educate on current events, and spark important discussions and conversations. View Reading List »

Our very own Jon Duplantier took part in a MLB Roundtable discussion among African-American players including Sterling Sharp, Josh Bell and Dom Smith. This panel was moderated by Harold Reynolds with Sharon Robinson (Jackie Robinson’s daughter) serving as a special guest.

We Will Not Be Silent

We’re here to support black lives. There’s a lot of injustices and things that we think should be changing. It’s all positive, for change and for everyone to be treated equally. This has allowed us a platform to use our voices more. The D-backs have done a great job of creating an environment where we can do that. It’s easier to tell your personal stories now. I’ve shared things that have happened to me that I’ve never really shared before. You get used to things happening and it’s just a way of life. I think now is the time to stand up for change.”

“Knowing that I’m white and that I’ll never fully understand doesn’t change the fact that I have a responsibility. I have a responsibility to listen and learn, to educate myself, to raise my children well and to not just talk about it but to be a part of the change. But the unfortunate fact is that this is not a reality in the way we treat people in our country. Black people have not been treated the same as white people -- not now and not in the past. Oppression, police brutality, racial profiling and lack of justice are the reality for black people in our country. They have not been afforded the same privileges and freedoms that white people have. We all have an opportunity and responsibility to change that in the future.” Read Article »

Robinson was more than a baseball player. D-backs broadcaster Mike Ferrin hosted a few guests to share untold stories about Robinson’s life before and after baseball. At a young age Robinson was an all-star athlete, played football and ran track. As an adult, he was in the military, stationed in Hawaii and transferred just days before Pearl Harbor. Watch this video to learn more about Jackie and hear untold stories from guests. 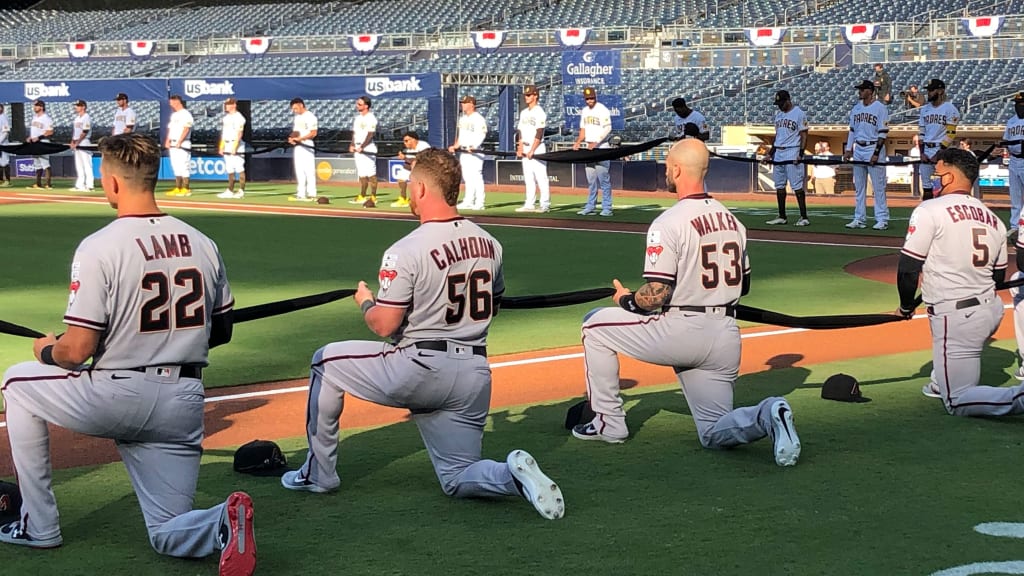 Major League Baseball and all Clubs used the platform and national stage of Opening Day to be allies and active participants in social change, and to support and amplify voices. Black Lives Matter game elements and merchandise included player workout and batting practice tees, a uniform patch, solidarity footwear, commemorative Black Lives Matter baseballs, base jewels, a stencil behind pitcher’s mound and more.

Major League Baseball will celebrate the 100th anniversary of the founding of the Negro Leagues in 2020 as a recognition of the men and women who greatly contributed to the history and legacy of our sport. The celebration of the anniversary also will reflect the importance of the Negro Leagues to American society, African-American business/entrepreneurship and infrastructure, all of which then contributed positively to the sport and, ultimately, Major League Baseball.

Join Major League Baseball in honoring the men and women of the Negro Leagues who greatly contributed to the history and legacy of our sport. Visit nlbm.com/centennial to learn more.

On September 24, 2020, the Arizona Diamondbacks Foundation and University of Phoenix presented Pilgrim Rest Baptist Church with 50 Chrome Book Laptops to support their High Achieving Scholars Program. The computers will be used to promote the "T" in “STEM” which stands for “technology.” Students will have an opportunity to access this technology for a variety of purposes while on campus and off-campus; whether it be to receive basic computer literacy skills or learning the basics of coding. Students will also use the computers to receive tutoring and other resources to promote their academic achievement.

Dr. Martin Luther King Jr. was a pioneer and advocate for change. He inspired generations through his commitment to love ALL people. The Arizona Diamondbacks Black Professionals & Allies team player resource group celebrates his life and legacy by sharing a few of their favorite quotes from Dr. King.

Favorite Quote: "If you can’t fly then run, if you can't run then walk, if you can't walk then crawl, but whatever you do you have to keep moving forward."

With all of the hate that is present in the world right now, personally, it feels difficult at times to continue doing the work. The process of change is slow and tedious, and can feel hopeless at times, so this quote really spoke to me because it reminds us that even if the changes we wish to see aren't immediate, we have to continue doing the work. We can't do it all at once, but we must always keep moving forward.

This is one of my favorite quotes from Dr. King because it is a call to stand up for and do what is right, especially when it may be uncomfortable. It is a test of our character and a call of courage in times of difficulty. It requires us to look in the mirror and examine who we really are.

I feel this quote is always relevant but in this current climate it is of even greater importance. We all need to have the power to forgive and learn to love and respect each other. We all need to make an effort to forgive people because hate does not bring people together.

Favorite Quote: "Injustice anywhere is a threat to justice everywhere. We are caught in an inescapable network of mutuality, tied in a single garment of destiny. Whatever affects one directly, affects all indirectly."

Favorite Quote: “We may have all come on different ships, but we’re in the same boat now.”

I love this quote as Dr. King reminds us of the reality of our differences, that make our history, our current and our future – and at the same time we are all together; be it in the same boat, family, job, company, state, country or any location. Reality matters and I feel once we can understand his quote, we can accept and appreciate our differences so that trust, empathy and progress can thrive. Where we came from should always be remembered and never forgotten – the reality of togetherness, connection and love is a reality.

Favorite Quote: “I have decided to stick with love. Hate is too great a burden to bear.”

I’m a big fan of this quote because there’s nothing anyone could ever do to make me HATE them. Our country needs more unity and love – not hate, judgement & racism.